Sometimes, the control panel industry can seem daunting to the layman. Technical information and terminology makes it inaccessible for those without a very good knowledge of electronics.

Whilst this is to be expected as control panel building is a, industry requiring skill and experience, a little knowledge never hurt anyone. Which is why we’ve produced a quick guide to inside a common control panel.

Whilst all control panels are different, some more complex than others, requiring more components within – they will all have a combination of some of the following:

Fuse Carrier – In the same way the circuit breakers protect the control panel from pulling too much load, fuses are sometimes used. Though they are a single use component, once triggered, they have done their job.

Bus Bar – The metal rail that the various internal components of a control panel are attached to.

Line Contactor – used for switching applications. In the example below they are used to disconnect power to the inverter. Dual redundancy in this case.

Inverter – Whilst a transformer converts AC voltage to another level of AC voltage, the inverter converts AC to DC and is used to control the starting of a motor (variable speed). 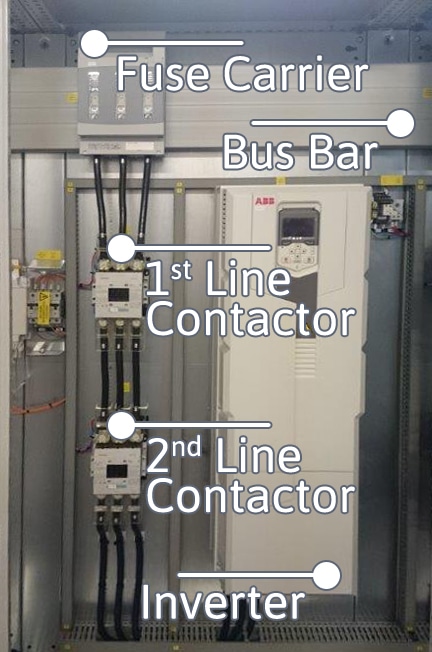 Transformer – In order to convert one level of AC voltage to another, you will require a transformer. For example, converting 400 volts of alternating current to 110 volts, transforming the power supply.

PLC – Or programmable logic controller, an industrial digital computer which has been adapted for the control of manufacturing processes in difficult or harsh environments. The PLC controls the output of the control panel by analysing inputs and executing code to facilitate the change in output.

Internet Port – Much like the Ethernet port that you have at home, this provides the control panel with a means to connect to the internet so that PLC, Human Machine Interfaces and other networked operating systems can be utilised.

Circuit Breaker – In order to prevent the output device from pulling too much current through the control panel and damaging internal parts, a circuit breaker is installed to break the flow of electricity should it become too much.

Wiring Channel – Surrounding the internal components of the control panel should be a wiring duct, this is where all grouped and neatly labelled wires should run.

Terminal Blocks – At different junctures around the control panel, wires will need to connect and there may be sections that external/field components need to be connected by the operator, ‘terminal blocks’ are used at such points.

Relay – Where current is required to pass to and from a component intermittently a relay may be used, this is an electromagnetically controlled switch that opens (or closes) as electricity passes through the coil attached to it.

Overload – To prevent components from pulling excess amps, control panel builders install an overload, another fail-safe in case something should go wrong somewhere in the chain of components.

Get in touch with DualTEC for intuitive control panel design